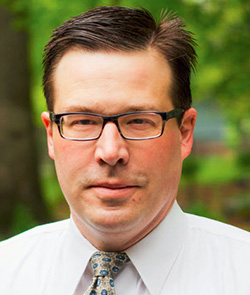 Michael Passineau, PhD, is a man who speaks in metaphors. For good reason — he works within a realm of medicine not many people understand. Director of the Gene Therapy Program at Allegheny Health Network (AHN) and a leading force behind AHN’s scientific research to address clinical needs, Passineau leans into the way a good metaphor can bring clarity to challenging concepts…including the nature of his work.

“I think of clinicians as chefs,” he says. “At the end of each day, they’ve done something tangible. They’ve made a meal. Researchers, on the other hand, are a bit like sculptors. We can work for years on something, but once it’s complete, it’s permanent.”

For over a decade, his research has revolved around gene therapy — more specifically, the use of ultrasound technology, instead of viral administration, to deliver therapeutic DNA into the cells of salivary glands. The goal: restore saliva flow to patients who suffer from radiation-induced dry mouth, or xerostomia.

Supported by grants from the National Institutes of Health (NIH), Passineau, radiation oncologist Dr. Mark Trombetta, and their research team are on track to petition the U.S Food and Drug Administration for Investigational New Drug (IND), status which would allow their work to move out of the lab and into Phase 1 clinical trials with humans.

Xerostomia is an iatrogenic complication, meaning it is caused by treatment — in this case, head and neck radiation to treat cancer. When the beam of radiation passes through the head, it damages the salivary glands, resulting in chronic dry mouth. This can lead to permanent loss of function in the salivary glands, difficulty eating, and loss of teeth.

“It’s anything but trivial,” says Passineau. “To illustrate how this condition impacts a person’s quality of life, I often have donors and executives take a piece of surgical gauze and chew on it while I describe my research. After about five minutes, they understand how difficult it really is.”

While there are a few existing medications used to treat xerostomia, they are difficult to administer, and their effects are not long lasting. Most people deal with the condition by carrying a water bottle at all times or by taking saliva substitutes. Unfortunately, these options don’t work particularly well.

Gene Therapy, Sonoporation, and “the longest seven nanometers in nature”

“We’re all made of trillions of cells,” says Passineau, beginning an attempt to explain gene therapy “in a nutshell.”

“Each cell has a role to play, whether it’s beating heart muscle, growing hair and nails, or perceiving light signals in your retina,” he continues. “The way those biochemical machines are engineered is dictated by your genomic DNA, which is DNA you get from your parents. Those genes code for proteins, which are the gears and springs that make cells function as biochemical machines.”

Gene therapy means reprogramming the cell — changing the machine code telling the cell how to work. That requires getting new DNA to travel inside the cell. Passineau says this “is one of the most difficult tasks in the world” since our cells are designed to repel foreign DNA.

In nature, foreign DNA gets into human cells only through viral infection or during conception. Virally administered gene therapy approaches have been developed, but one drawback is that after a viral vector is introduced into the body, the immune system fights back and will also react to the vector on subsequent treatments, making them ineffective.

That’s where Passineau’s research comes in. “We’ve developed a method of delivering genes that doesn’t require viral administration,” he explains. “Instead, we use soundwaves.”

To understand how ultrasonic administration, or sonoporation, works, Passineau turns again to metaphor.

“Picture an agricultural pond, with a thick layer of algae on it. If you throw a ping-pong ball into the middle, it will just sit on top,” he says. “That is very much what a cell membrane is like — the outer covering is rather rigid. So, to deliver the genes, we have to get through the cell membrane. It is only seven nanometers thick — but it’s the longest seven nanometers in nature for someone like me.” 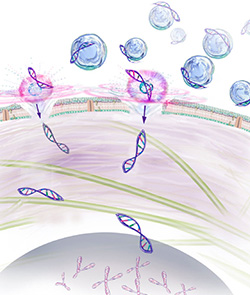 A sketch Dr. Passineau uses to explain how sonoporation can be used to get DNA across “the longest seven nanometers in nature.”

Passineau’s ground-breaking research uses soundwaves to temporarily alter the permeability of the cell membrane, allowing for the transfer of therapeutic DNA into the cell.

Let’s understand how this works in our pond metaphor before getting into what that means for gene therapy.

“Imagine we explode a grenade above the pond,” Passineau says. “For a moment, the layer of slime would open up, and you’d see down to the bottom of the pond. Then, it would close again.”

In Passineau’s lab, the “grenade” is a mix of a gene drug for xerostomia known as Aquaporin-1 and a solution of microbubbles. Used routinely in cardiac imaging and other medical applications, microbubbles have a resonant frequency that can be used to create the desired “explosion.”

“The classic example is a crystal glass — if an opera singer hits the right frequency for that glass, it will vibrate. If she really turns up the volume, the glass will shatter, because it can’t absorb the energy,” Passineau says. “That same thing happens with the microbubbles.”

So — after administering the microbubble and Aquaporin-1 solution to the treatment site, a low-frequency ultrasound beam is used to create an ultrasonic acoustic field in which the bubbles vibrate. Turn up the power, and the bubbles implode. That opens up the cell membrane long enough for the gene drug to get in, before it closes back up.

Other Uses for Sonoporation and Gene Therapy

“Sonoporation works well for what we’re doing in the salivary glands, but not so well for the heart, and certainly not for the brain,” Passineau points out. “However, we have other applications we intend to use this research for.”

He explains that one promising use involves Sjogren’s syndrome, an autoimmune disease affecting nearly 4 million Americans (90 percent of whom are women). The disease’s debilitating symptoms include severe dry mouth, which may be treatable with Passineau’s gene therapy technique.

Another research area he says he is excited about is the use of gene therapy to combat obesity and overeating. “Do you remember when you were a kid and you’d eat too fast and your mom would tell you to slow down because your brain didn’t know whether or not your stomach was full yet?” he asks. “Well, that was absolutely true.”

He explains that, when we eat, our intestines stretch and release a protein called peptide YY (PYY), which circulates through the blood, eventually entering the saliva and interacting with receptors on your tongue.

“Think of your appetite as a glass of water,” he says. “To feel full, you have to fill the glass with PYY. Some people have bigger glasses than others, but if we can use gene therapy to modify saliva and make the glass start half full, then a person would feel full without needing to eat as much.”

Passineau adds that poor health outcomes and high costs associated with obesity make this an attractive target for research investment. Obesity adds billions of dollars to the cost of medical care in the U.S. each year, and some studies estimate the cost as high as $190 billion per year. 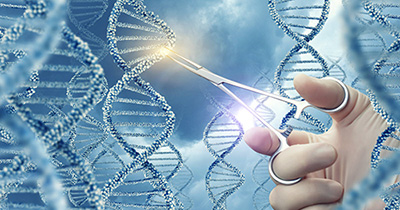 If gene therapy was this easy, everyone would be doing it. Instead, as Passineau points out, it is “one of the most difficult tasks in the world.”

Research: An Important Piece of the Puzzle

“At AHN, research is a small but important piece of the operation,” Passineau says. “It’s important to note that everything we do in research is driven by physicians who have recognized clinical needs, and who have partnered with us to develop novel solutions.”

Similarly, looking at the value that research can deliver, and its potential impact on both health and overall health care costs, Passineau says that federal funding has an essential role in advancing further discoveries in areas like gene therapy and sonoporation. “Government investment really is the lifeblood of what drives research,” he says.

Another impact on the success and pace of advances in medical research is whether talented, driven young people decide to take this path. Passineau admits that, like the process of research itself, the path to becoming a successful researcher can be long and sometimes feels like three steps forward, two steps back. But if the work feels meaningful, it’s all worth it.

“I landed where I am today because I figured out what I was good at,” he says. “Inventing, solving big picture problems — and helping people.”