Highmark Health one of three Pennsylvania businesses recognized by Department of Defense for going "Above and Beyond" to support employees in the National Guard and Reserve. 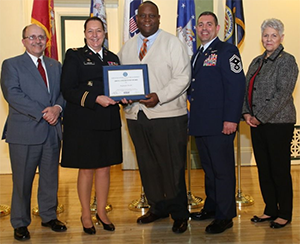 The award was recently presented to Highmark Health by Denise Gross, Pennsylvania state chairperson of the ESGR, in a ceremony at Soldiers & Sailors Memorial Hall & Museum in Pittsburgh. "The ESGR Above and Beyond Award was created by ESGR to publicly recognize American employers like Highmark Health, who provide extraordinary patriotic support and cooperation to their employees, who like the citizen warriors before them, have answered their nation's call to serve," said Gross. "Supportive employers like Highmark Health are critical to maintaining the strength and readiness of the nation's Guard and Reserve units."

Highmark Health goes beyond the requirements of the Uniformed Services Employment and Reemployment Rights Act (USERRA) to offer members of the Guard and Reserve who are full-time or auxiliary employees up to 20 paid days of military leave of absence for the performance of duty in the armed services, after which the employee is granted non-paid military leave in accordance with USERRA and may elect to use earned paid time-off days toward the remainder of the military duty. Highmark Health also provides uninterrupted family health, dental, vision, and other continuous benefits while its civilian warriors are serving.

"The Above and Beyond recognition affirms our culture of support for members of our workforce who are continuing to serve in the military, as well as of our many veterans," said Dr. Lonie Haynes, vice president of diversity and inclusion for Highmark Health, and a U.S. Army veteran. "These individuals bring the Highmark Health organization a high degree of leadership, commitment and discipline. We feel that supporting their military service is absolutely the right thing to do — for them, for us, and for our national defense."

Nominations for ESGR recognitions must be made by members actively serving in the Guard or Reserve. Highmark Health was nominated by Michael Harper, human resources business partner with Gateway Health Plan, a Highmark Health company. Harper, an Air Force senior master sergeant, recently retired after 26 years of combined service between the Army National Guard and Air Force Reserve. "Highmark Health does an outstanding job of supporting our nation's military," said Harper. "The organization stands firmly by its employees who are members of the Guard and Reserve as well as veterans, not only through benefits programs, but through a military talent acquisition program, the V.E.T.S. (Voices of Employees That have Served) business resource group, and the commitment of the organization's leaders to accommodate our military members as they meet their service obligations to our nation's defense."