PITTSBURGH (March 19, 2018) — Highmark Health today announced financial results and performance during 2017, reporting an excess of revenue over expenses of $1.1 billion, an improvement of $1.0 billion over prior year, as well as an operating gain of $616 million. 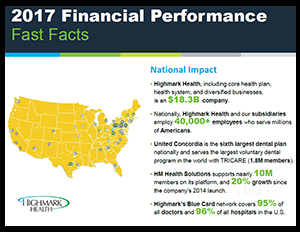 Pre-tax results of $1.1 billion were driven by continued strengthened performance in the Health Plans' commercial and government segments, Allegheny Health Network's operational progress and growth, and the gain associated with sale of a portion of the vision business. Total revenues of $18.3 billion remained consistent with prior year due to an anticipated decline in Health Plan revenues associated with more sustainable product offerings, which was offset by growth at both Allegheny Health Network and HM Health Solutions.

Highmark Health's balance sheet strengthened considerably during the year, with net assets of $6.5 billion, an increase of 25 percent over prior year. The organization grew its cash and investments to $7.9 billion as of December 31, 2017, which enables us to invest in high-value, community-based care.

"Thanks to our steady progress and continued momentum, we delivered our strongest financial performance and a capital level of $6.5 billion in 2017, confirming that our strategy is working and that consumers are benefitting from increased access to high-quality, community-based, affordable health care," said David Holmberg, president and chief executive officer. "While there is still work to do, we remain firmly committed to, and are well on our way toward, getting health care right."

"2017 was a watershed year for Highmark Health's financial performance, as we were able to sustain the solid performance that we reported at mid-year, driven by strong overall results in the Health Plan's government and commercial books of business, including a substantial turnaround in the ACA business," commented Karen Hanlon, executive vice president and chief financial officer. "We are also pleased that Allegheny Health Network extended its improved operational performance for a fourth consecutive year with continued revenue growth and improved EBITDA, driven by the system's continued focus on higher quality and cost management, reinforcing our confidence that it is well positioned for the next phase in its transformation as the expiration of the Consent Decree in June 2019 approaches."

The Health Plan reported an operating gain of $750 million for the period ended December 31, 2017, an improvement of $508 million over prior year. These gains were the result of significant progress in the government business, which delivered a $411 million improvement over prior year, as well as an increase in commercial business results of nearly $100 million to $317 million.

This strong performance is attributed to continued actions taken in our ACA business — which produced income for the first time in 2017 — along with continued focus on reducing administrative costs and the successful implementation of our value-based customer initiatives.

Highmark remains the largest commercial health plan in Pennsylvania, with core medical health plan membership for residents and businesses of 3.9 million. In our core health insurance plans in the 29-county western Pennsylvania market, we have 2.3 million members, and 5.4 million customer relationships through our health insurance, dental and vision programs and stop-loss coverage. In western Pennsylvania, our commercial market share of 48 percent is significantly larger than our next largest competitor, as confirmed by 2017 data from Decision Resources Group. Highmark's current enrollment for individuals who have purchased plans on the federal exchange and directly through Highmark totals approximately 91,600 members.

United Concordia, our dental business, capitalized on the growth it experienced during the past two years and continued investment in new technologies, realizing higher network revenues and continued strong commercial margins that delivered $114 million in operating income, a $70 million improvement over prior year. These gains were aided by the implementation of the $2.9 billion TRICARE Dental Program contract.

Partially offsetting the gain in the dental business, Highmark Health's stop loss business, HM Insurance Group, reported an operating loss of $30 million, a decline from the prior year, as the stop loss and managed care reinsurance industries continue to face headwinds. The company continues to work to mitigate these losses through disciplined pricing actions and enhanced care initiatives.

Allegheny Health Network delivered its strongest operating performance since its inception, reporting revenues of $3.1 billion, growth of $217 million or nearly 8 percent over prior year, and an operating gain of $31 million, an improvement of $64 million year over year. The system has improved earnings by nearly $200 million since its formation, while revenues have grown nearly 40 percent and EBITDA has now reached $221 million. This progress was driven by a number of key factors, including stable hospital volumes and high patient acuity, greater operational efficiencies and more effective business and clinical processes such as revenue cycle operations, better care coordination through Epic, and higher quality revenues.

Physician office visits increased by more than 4 percent and ambulatory surgery center volume increased by 10 percent, while hospital inpatient and outpatient volumes remained flat. Allegheny Health Network continues to grow volumes organically, rather than through acquisition, in a market that overall continues to see volume declines.

In 2017, HM Health Solutions initiated the onboarding of five new health plan partners onto its Enterprise Health Solution platform, including Blue Cross Blue Shield of North Dakota and Blue Cross Blue Shield of Wyoming, and completed the development of the platform to expand its services to include Medicaid Health Plans. The first Medicaid members transitioned onto the platform in January 2018, with an additional 300,000 members expected through January 2019. These new customers increased the number of members on the platform to nearly 10 million — representing 20 percent growth since its inception in 2014. With the introduction of the Medicaid line of business in 2017, the Enterprise Health Solution now supports every health care line of business.

Highmark Health experienced a $43 million improvement in corporate and other expenses over prior year. This was driven by improved performance in our Medicaid affiliate business and lower Medicaid platform development costs, as the work was completed in 2017.

Highmark Health, a Pittsburgh, PA based enterprise that employs more than 40,000 people who serve millions of Americans across the country, is the second largest integrated health care delivery and financing network in the nation based on revenue. Highmark Health is the parent company of Highmark Inc., Allegheny Health Network, and HM Health Solutions. Highmark Inc. and its subsidiaries and affiliates provide health insurance to nearly 5 million members in Pennsylvania, West Virginia and Delaware as well as dental insurance, vision care and related health products through a national network of diversified businesses that include United Concordia Companies, HM Insurance Group, and Visionworks. Allegheny Health Network is the parent company of an integrated delivery network that includes eight hospitals, more than 2,800 affiliated physicians, ambulatory surgery centers, an employed physician organization, home and community-based health services, a research institute, a group purchasing organization, and health and wellness pavilions in western Pennsylvania. HM Health Solutions focuses on meeting the information technology platform and other business needs of the Highmark Health enterprise as well as unaffiliated health insurance plans by providing proven business processes, expert knowledge and integrated cloud-based platforms. To learn more, please visit www.highmarkhealth.org.