When Mark Brilmyer donated a kidney as part of the National Kidney Registry’s Voucher program in January 2017, he and his wife, Vicky Brilmyer, turned the hospital bed toward the window to enjoy Pittsburgh’s winter skyline.

“We pretended we were looking down on Central Park,” he says.

Nine months later when Vicky went into Allegheny General Hospital (AGH) to receive her new kidney from a young woman in Washington, D.C., Mark had a special request for the nurse.

“I asked if we could get the same view of ‘Central Park.’ They said of course.”

Kidney Donation and Transplantation: The Waitlist

In the U.S., there is a list of names that grows by the day — hundreds of thousands of individuals, all waiting on deceased donor kidney transplantation, with a new name added every 14 minutes. Thirteen people die each day while they wait for a kidney.

Between 2013 and 2015, Vicky and her brother, both diagnosed with Polycystic Kidney Disease (PKD), joined the ever-growing list of names. While her brother eventually received a kidney from his wife through the paired donor program, Vicky’s husband, Mark, was not a match.

“We kept holding out hope,” says Vicky. “And when we learned he wasn’t, we were so deflated.”

While they still had the option to participate in the paired donor program, which would involve joining a “chain” of other donors and recipients, they were wary. This option would require them to simultaneously undergo surgery, meaning they wouldn’t be able to care for each other post operation.

“I’ve always been his caregiver,” says Vicky, “and he’s been mine. We’ve been able to support each other our whole life together.” 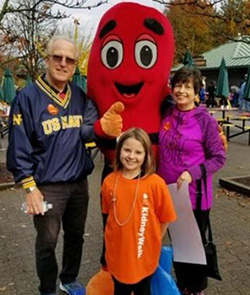 The Brilmyers participated in the 2017 Kidney Walk with niece Dakota just six weeks after Vicky’s transplant.

When Vicky read about a man in California who inspired the National Kidney Registry’s Voucher program, she was intrigued. Howard Broadman’s grandson was born with one kidney; Howard knew that when the time came for his grandson to need a transplant, he might be too old to donate. His participation in the voucher program meant his kidney would go to someone who needed it now, and if or when his grandson needed a transplant in the future, he could “redeem” his voucher to increase prioritization.

For the Brilmyers, the first scenario seemed like a promising option.

“I decided to ask Allegheny Health Network (AHN) if they’d ever done one of these advanced donor programs,” says Vicky, “or if they would consider it. I knew that only UCLA and about nine other hospitals nationwide were doing it. But Mark was willing to donate sooner rather than later, and my numbers were still good enough to wait, so it was worth a try.”

To her delight, AHN, who had yet to participate in the program, agreed to do some research. During their next meeting, paperwork was signed and Mark agreed to be available for surgery as early as January 1, 2017. They called him in on January 4, and his kidney went to a man in Florida.

After two days in the hospital, he was on his way home with Vicky. “I thought he would need more help,” she says. “But he took a shower the day he came back and was walking up the stairs. He couldn’t lift things for six to eight weeks, but he never needed any pain medication.”

Mark says his sister-in-law, whose surgery involved a more arduous recovery, called him “some kind of Superman.”

One helpful factor in the speedy recovery: Mark’s AGH surgeon, Dr. Lorenzo Machado, only needed to make a small incision and was able to proceed without cutting the surrounding muscle.

“Mr. Brilmyer’s surgery was a hand-assisted laparoscopic donor nephrectomy, which has a shorter recovery and less associated pain compared to the traditional open approach,” Dr. Machado explains. “This is one version of minimally invasive surgery, and all centers around the country do a minimally invasive approach. Most recently, we have transitioned to the robotic-assisted laparoscopic approach as a means of further improving patient recovery and associated pain. We’re one of only a handful of centers offering it.” 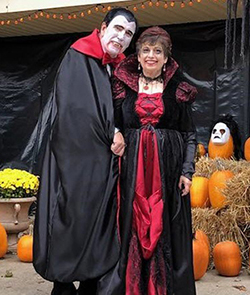 Far from being scary, Mark says the decision to become an organ donor was “a no-brainer…Why wouldn’t I do it?”

Before the Brilmyers requested to participate in the voucher program and transitioned to AHN from their previous provider, they had a two-hour informative interview with Dr. Machado.

“He treated us like people,” says Vicky. “He never pushed us toward AHN. He told us to take as much time as we needed to decide.”

One of the determining factors in their decision to switch was AGH’s past participation in one of the largest donation chains in the country at the time.

Once they had officially transitioned to AHN, Dr. Machado advised the pair to prepare for surgery as if they were training for a marathon. “He called himself the plumber,” she says. “He would put in the new kidney, find two arteries, and hook it up, but after that, his work was done. As good as we could feel the day before surgery, the better.”

Nine months after Mark’s kidney was removed, Vicky was “mentally, physically, and spiritually” ready to undergo her own surgery. If she wanted to preempt dialysis, her team suggested they start searching for a match. Because there was no guarantee they would find a match immediately, the Brilmyers had a back-up plan.

“If we couldn’t find a kidney through the registry by October 1, my sister-in-law was willing and able to donate. But it’s emotional to ask someone to donate an organ,” Vicky says. 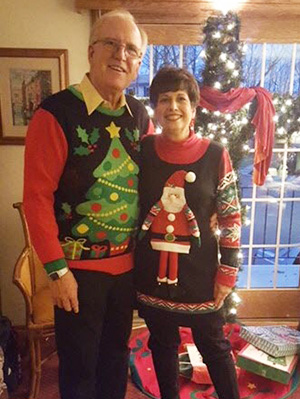 As we’re talking, Marks leans in and gives Vicky’s shoulder a squeeze. “He has always helped me and I’ve always helped him,” she continues. “He recovered from surgery surprisingly well, but you just never know.”

Fortunately, a donor was identified. Vicky’s kidney came from a 24-year-old woman in Washington D.C. who donated so her mother would receive a kidney.

After the transplant on September 20, 2017, Vicky was back to work in a mere four weeks. She happily calls it a “miracle.”

“We’re blessed,” she says, “Many people who need a kidney transplant are dealing with multiple health complications or they’re already on dialysis. It was hard for me to actually move forward because I wasn’t feeling sick yet, but my numbers had decreased enough that to wait would have been unwise.

“Often when people on dialysis are waiting for a deceased donor,” she adds, “they get that call that doesn’t turn out to be a match, and it happens over and over. They’re constantly on edge, sometimes rushing to the hospital just to be disappointed. If it can help, I want people to be aware of the voucher program.”

“I just had my 18-month checkup,” says Vicky. “All the medication I’m on overwhelmed me at first, but I got used to it and now just stick to the rules.” 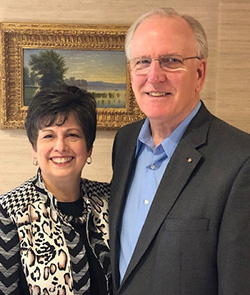 The Brilmyers in a recent photo.

“I set my alarm to make sure I take them at the right time,” she says. “And he has his on as a backup in case we go to a movie or get distracted.”

Between them, the Brilmyers have 25 nieces and nephews and 13 great-nieces and great-nephews. If she ever needs a friendly third reminder, she’s covered.

“It’s a family affair,” she says. “Everyone looks out for me.”

Vicky calls the voucher program and the procedure itself “life-changing.” But Mark is quick to add that, “Being a donor hasn’t changed my life at all. It was a no-brainer. Hearing about all those people on the waitlist who need a kidney — why wouldn’t I do it? Wouldn’t you do the same?”

If you’re interested in doing the same, and learning more about kidney donation, check out the National Kidney Foundation’s donor resources, the National Kidney Registry’s Voucher program, and our sidebar about the broader topic of organ donation. In western Pennsylvania, you can also go to www.AHN.org to learn about AHN’s transplant services and resources.

MYTH: If I am in an accident and medical personnel find my driver’s license, they won’t try to save my life.

TRUTH: The number-one priority is to save every life. Paramedics, nurses and doctors will do EVERYTHING possible to save your life. CORE is only notified after all life-saving efforts have failed.

MYTH: There is no difference between being brain dead and being in a coma.

TRUTH: Brain death is pronounced when there is a lack of blood and oxygen flow to the brain. Brain death is the medical, legal and moral determination of death. To verify brain death, a series of tests are performed over a period of time and more than one diagnosis is required before the donor’s family is presented with the opportunity to donate. There is no recovery from brain death.

MYTH: My family will not be able to have an open casket at my funeral because organ and tissue donation means my body may be disfigured.

TRUTH: Organ and tissue donation will not interfere with traditional funeral arrangements such as an open casket. Doctors maintain the utmost respect for the donor and organs are removed in a routine operation similar to other types of surgeries.

MYTH: The rich and famous receive preferential treatment on the waiting list.

TRUTH: Financial and celebrity status do not determine who receives a transplant. A national computer network, maintained by the United Network for Organ Sharing (UNOS) matches organs according to height, weight and blood type, followed by medical urgency and then time accrued on the waiting list. Age, race, gender, religious affiliation or financial status are not factors that determine who receives a transplant.

MYTH: I am too old to register to become an organ donor.

TRUTH: There is no set age limit for organ donation. Every potential donor is evaluated on a case-by-case basis at the time of their death to determine which organs and tissues are suitable for donation.

MYTH: My organs aren’t of any value because of my medical illnesses.

TRUTH: Few illnesses or conditions prevent someone from being a donor. At the time of death, CORE reviews medical and social histories to determine suitability. Poor vision, cataracts and glaucoma do not eliminate someone’s ability to donate. The ability to donate is determined on a case-by-case basis. Although someone may not be able to donate blood, it does not always prevent the individual from donating organs and tissues.

MYTH: Organs go to people who didn’t take care of theirs.

TRUTH: Organs go to people who were born with or developed diseases that have caused organ failure. Less than five percent of people awaiting transplant have destroyed their organ through substance abuse and they must achieve and sustain sobriety before they can be listed for transplant.

MYTH: My family will have to pay for costs related to my donation.

TRUTH: Donors and their families are not responsible for any costs related to donation. All costs are incurred by the organ procurement organization.

Visit CORE’s website to read their full list of organ donation myths, browse their educational resources, and learn how to register to become an organ donor today.