Ask a Doc: The Next Generation of Coronary Stents

In our Ask a Doc series, we sit down with physicians and other clinical experts, including those at Allegheny Health Network (AHN), for a chat on an important health topic. In this edition, we’re talking about stents with Dr. Guy Piegari, Jr., a cardiologist at Penn State Health.

Interventional cardiology, which uses long, thin, flexible tubes called catheters to treat narrowed or blocked arteries around the heart, has been around for decades — dating back to the very first balloon angioplasty on a coronary artery in 1977.

But inflating balloons to compress coronary plaque to clear a blockage was only the beginning of a form of less-invasive cardiac treatment that's seen continuous improvement.

Amanda Changuris (AC): Dr. Guy Piegari, Jr., as a cardiologist and medical director of the cardiac catheterization laboratory at Penn State Health St. Joseph, what were the shortcomings associated with those first angioplasty procedures — and how were they overcome?

Dr. Guy Piegari, Jr. (GP): Balloon angioplasty worked very well to open the vessel acutely. One of the major problems, though, was that when you deflated the balloon, the artery would collapse. It was often very difficult to keep the artery open once you approached it with a balloon, so that was one area where we needed to improve.

Ultimately, we developed the concept of stenting the blockage. So you would open the artery with a balloon, then be able to put a stent in to prevent collapsing.

AC: But from what I understand, drug-coated stents aren't a perfect solution either — right?

GP: Right. In order to keep the drug on the stent, you had to use a membrane to hold the drug. The problem with the membrane is that even after the drug is gone, the membrane stays. That membrane gives blood clots a place to form, which is why we always have to keep patients who have stents on what's called dual antiplatelet therapy (when patients take aspirin and one additional antiplatelet medication).

Dual antiplatelet therapy helps to prevent the membrane from causing the stent to cause a blood clot to form. After about a year, the stent is almost entirely coated within the artery, so the incidence of thrombosis (blood clot formation) declines significantly, but it never goes away because there is always a foreign body in the artery.

The stent is metal, is not flexible, and doesn't allow the artery to dilate, and it's there permanently. While they are the most effective offering we have today, it's only natural to want to make improvements in the next generation of stents. The natural extension was to try to come up with a drug-coated stent that lasts for about a year or so and then disappears. That's where the concept of the bioabsorbable stent came into being.

AC: Your team has been involved in the clinical trial comparing these absorbable stents to the standard drug-coated stents for the past several years. What have you learned in that process?

GP: We've been recruiting patients for the Absorb trial since it opened three years ago. Last year, some of the data was presented at the American Heart Association meeting, and the stent that we're testing has been found to be non-inferior to currently available stents. 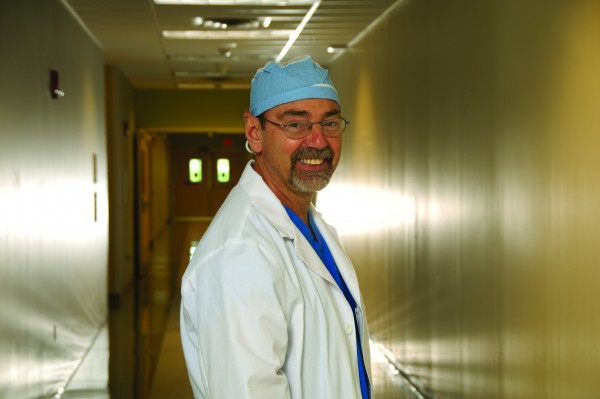 That's usually the first step in any kind of device trial. First, you have to show that it's at least as good as what's currently available. The next step will be to see if it's actually better. That should happen in the next couple of years.

AC: This is the only clinical trial currently testing this absorbable stent in the United States. How did St. Joseph get involved?

GP: It's a very prestigious trial. Sites were selected by the stent's manufacturer based on previous performance in other trials. They considered how well we enroll patients, how well we follow the protocol guidelines, and our outcomes.

Even though St. Joseph is a small, community hospital, we do a lot of good clinical research which has contributed to the approval of many different devices.

A History of Innovation

AC: Your clinical trials program began in 1999. Where have you focused those efforts?

AC: In your mind, what's made your clinical trial program so successful?

GP: We have a lot less difficulty recruiting patients for clinical trials than most big institutions. For the most part, the patients I treat know me well, and when I invite them to participate in the trial, they trust my judgment. They know that I have their best interests in mind and they also know that I will be following them going forward.

For more information on clinical trials available at St. Joseph's and other medical facilities in the Highmark health plan networks nationwide, visit clinicaltrials.gov.

Clinical trials are research studies that explore whether a medical strategy, treatment (including medications), or device is safe and effective. By testing these approaches in a laboratory first, possibly in animals, and then in humans, these trials are designed to determine if they:

All of the results help to advance medical knowledge and improve patient care over time.

St. Joseph and Berks Cardiologists are also very active in another clinical trial testing BioFreedom™ drug-coated, non-absorbable stents. In fact, the hospital has enrolled more patients in this study than any other trial site in the country.

The BioFreedom stent is unique because the drug is on the stent — there's no membrane needed (so none can be left over to potentially trigger clot formation down the line). The stent delivers the drug to the plaque over the course of 6 to 12 weeks, and then it's completely gone.

"That does a couple of things," says Dr. Piegari. "First of all, it allows us to decrease the length of time patients require dual antiplatelet therapy from the currently recommended one year to three months. That's a significant decrease in time. That translates into less risk of long-term bleeding, less cost to the patient, and improved compliance."