Health Care Collaboration Is a Win for All

NOTE: An earlier version of this article appeared on the Populytics blog

You may be seeing more news lately highlighting ways that health networks and insurers are working together. As a family physician with the Lehigh Valley Health Network (LVHN) since 1997, and current medical director for two organizations, I see this as a very positive development. 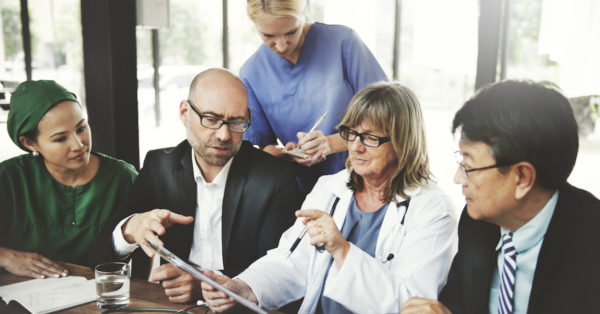 Too often in the past, health care providers and insurers had different assumptions and incentives, worked toward different goals, and missed opportunities to share information or insights that could help the system work more efficiently — and deliver better care for patients.

You can see an entirely different mindset now in the collaborative relationship we have with insurers like Highmark and the mutual embrace of value-based care. As one McKesson article put it, the new reality is that “payers and providers win only when they work together to produce the best possible clinical outcomes at the lowest possible costs.”

Let me provide you with one example of how better collaboration and coordination of care between providers and insurers can make a real difference for patients.

I have two patients who were dealing with multiple health problems when they sought my care. To protect their privacy, I won’t use their real names, but let’s call them Mr. and Mrs. Jones.

Mrs. Jones, only 48 years old, had a major heart attack, and while still in the open-heart unit, she suffered a massive stroke. Meanwhile, Mr. Jones, who was the caregiver for his wife, had heart disease and unfortunately ended up in the hospital at the same time she did.

When they were discharged from the hospital, Mr. and Mrs. Jones’ medications were reviewed — and a frightening discovery was made. The medications on record with the insurer were different than what was documented on their medical charts, which were also different from what I had recorded. We were able to spot those discrepancies only because we were sharing that data. The lack of agreement in the respective records instantly raised a red flag telling me that I better look into this.

I asked the couple to bring all of their medications into the office so we could review them together. Upon investigation, I discovered that they were taking multiple drugs that had the same drug classifications and shouldn’t be taken at the same time. As you can imagine, this could be harmful, if not potentially deadly.

Mr. Jones also mentioned that he couldn’t see the writing on his pill bottles clearly. I reviewed when he had last received an eye exam, and noticed that he was long overdue. My team immediately made him an appointment with a retinal specialist who discovered severe bleeding at the rear of his eye. This was likely caused by the duplicative blood thinners he was taking. The specialist was able to stop the blood thinner and treat his eye, saving Mr. Jones from even further serious conditions such as muscle breakdown or liver failure.

Everyone in that chain of events was able to do a better job of helping Mr. and Mrs. Jones be healthier — and it all started with sharing data that allowed us to spot a problem sooner rather than later.

The Value of Provider-Payer Collaboration and Population Health Analytics

In the past, providers only had patient information that was gained through medical records, which is half of the picture. Now, by partnering with insurers, physicians and their clinical teams have access to insurance claims data. Combine that with innovative partnerships with population health management companies like Populytics who turn medical and insurance data into actionable information, and now doctors have a wealth of new information that provides a more complete view of a patient’s health.

Part of being a good doctor involves getting to know your patients — really know them. That means taking the time to listen during an appointment certainly, and it’s also beneficial when a doctor and patient can draw on a long history. But putting population health analytics in front of me that can be sliced and diced in meaningful ways is another powerful tool to help me “really know” my patients. It makes it possible to identify duplicative services and care gaps almost automatically, and it also allows me to have more meaningful conversations with my patients during visits; the data can point me in the right direction so that I can get right to the core of a patient’s health care needs.

I now have more patient information at my fingertips than ever before, which helps me to provide the right care at the right time and place. That extra information is what allowed me to help Mr. and Mrs. Jones. Their story could have ended up very differently if Mr. Jones’ issues had not been caught, his condition deteriorated, and he became unable to help the wife depending on him for her care.

That’s just one story. In different ways, I see the value of greater collaboration centered around the patient play out on a daily basis. As Highmark Health CEO David Holmberg put it in another article on this blog: insurer + provider = better health care.

Straight from the CEO: Strategic Partnerships Create Value for the Customer

Getting Health Care Right: A Conversation with Deb Rice-Johnson

I have also served as Medical Director of the LVPHO and Valley Preferred for the last six years, evolving the LVPHO ACE program to its current nationally recognized status. As Medical Director of the Lehigh Valley Health Network Accountable Care Organization for over two years, I am also proud of our successful first year of participation in the CMS ACO program, making the LVHN ACO the only successful ACO in the state of Pennsylvania.

I am a graduate of the Pennsylvania State University College of Medicine, did my residency in Family Medicine at St. Margaret Memorial Hospital in Pittsburgh — and, notably, was born at Lehigh Valley Hospital.