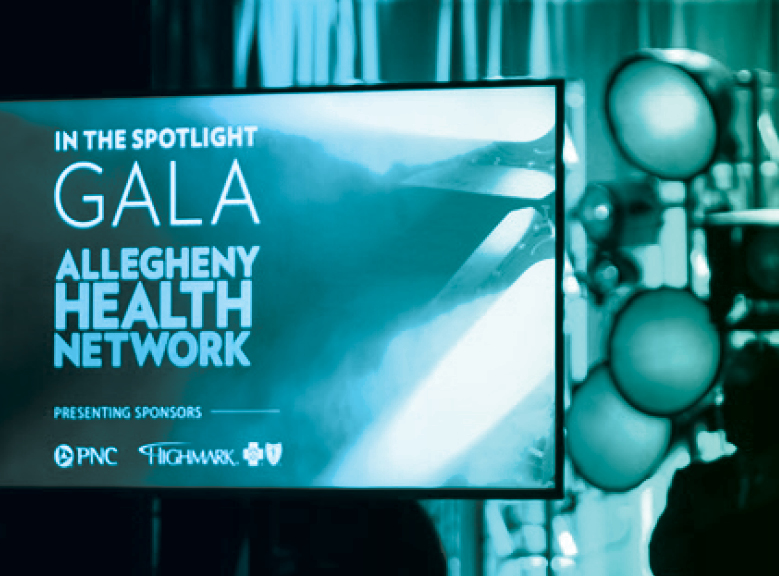 Not all of the charitable work done by Highmark Health and its affiliates involves foundations. In 2017, one of those affiliates, Allegheny Health Network, held its first-ever gala, at Stage AE on Pittsburgh’s North Shore, welcoming a crowd of nearly 500 guests and raising $5.6 million for the network.

Many of those grateful patients were on hand at the gala. Among them were Julie and Mike McMullen, who are endowing AHN's Women's Cancer Chair position, and Steven D'Achille, whose Alexis Joy D'Achille Foundation is helping to build the Alexis Joy D'Achille Center for Women’s Behavioral Health at West Penn Hospital.

Julie McMullen was diagnosed with ovarian cancer 12 years ago, at age 27, and was treated by gynecological oncologist Dr. Thomas Krivak, an AHN physician who preserved Julie's fertility and allowed her to have two more children. Steven D'Achille lost his wife, Alexis, to postpartum depression when their daughter Adriana was just a few weeks old, and he has chosen to honor his wife's memory by starting a foundation in her name.

Gifts like the ones highlighted last September are proof of the progress being made at AHN. In the end, the gala was not about the money raised, but about the patients served, and the way donor support allows AHN to better care for its patients and its communities.

"Every step of the way, for 170 years, AHN and its member institutions have been supported by our kind and generous neighbors," said Allie Quick, AHN's Chief Philanthropy Officer. "The generosity of the community has shaped AHN into what it is today, and it's that same generosity that will keep AHN thriving well into the future for the benefit of its patients and all of western Pennsylvania."