Purpose:
Providing help where it's needed most 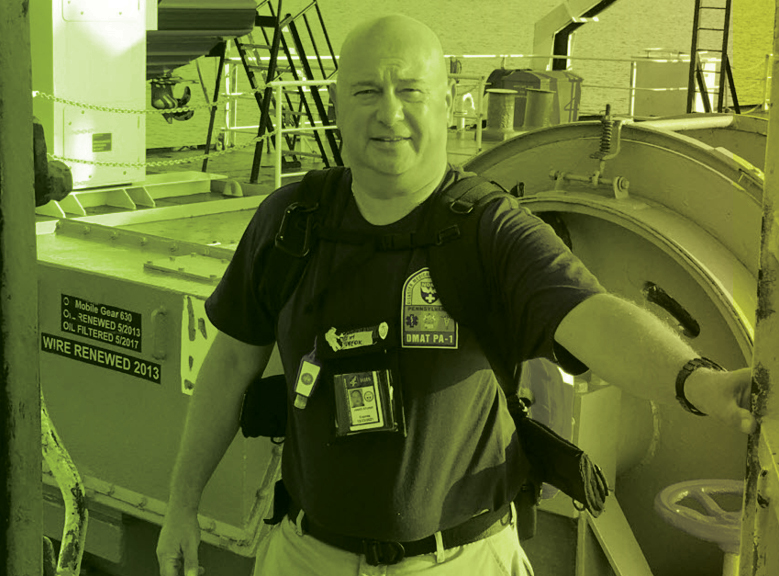 Part of getting health care right means doing what’s right — especially when help is needed most.

DMATs are groups of physicians, nurses, paramedics, and other specialists deployed by the federal government to provide medical care during natural disasters. Local hospitals were inaccessible because of massive flooding in the wake of Hurricane Harvey, so Rausch's team was stationed in a high school gymnasium turned into a makeshift emergency department that treated 60 patients daily over a 10-day period.

"Disaster relief always starts with the local people, and we're there to help bridge the gap," Rausch said. "The locals are overwhelmed until they can get back on their feet, and many times, we're relieving them so that they can take care of their families. They have their own lives to deal with as well."

Jonah Thompson, CP-C, operations manager, Mobile Integrated Health for AHN, was deployed to Texas with Team Rubicon, a volunteer organization made up primarily of military veterans who specialize in disaster relief, clean-up, and operational coordination. Rubicon team members engaged in swift-water rescue efforts involving both people and stranded pets, in addition to conducting search-and-clear missions and working on depth surveys.

"It was a very simple decision for me. My philosophy is, if my family was involved in some type of tragic event, I would hope someone would come and help us. It’s not convenient for your employer, or for the emergency responders, that you leave at the drop of a hat, but somebody’s got to do it."

Some of our affiliated companies, such as San Antonio-based HVHC (which at the time included Davis Vision and Visionworks), experienced the negative impacts of the storms directly and rallied the organization to move quickly to support the immediate basic needs of their communities. Working with the American Red Cross and the San Antonio Area Foundation, they established the HVHC Hurricane Disaster Relief Fund to provide support to employees impacted by Hurricane Harvey.

This served as a catalyst for the enterprise to collaborate more broadly with the American Red Cross, including a special microsite for Highmark Health enterprise employees that allowed them to direct their contributions to specific efforts. Highmark Inc. contributed $50,000 to the American Red Cross to support their efforts in southeast Texas, as well as $10,000 to the HVHC fund.

Highmark Health formed a similar alliance with Brother's Brother Foundation, a Pittsburgh-based, gift-in-kind charity that focuses on medical, educational, and humanitarian assistance needs around the world. Building a coalition that also included the Pittsburgh Metropolitan Area Hispanic Chamber of Commerce, several Blue Cross Blue Shield health plans across the country, the Pittsburgh Pirates, and others, a mission-critical medical and humanitarian supplies "last-mile" distribution system was built in Puerto Rico to reach those impacted by Hurricane Maria. Since Highmark Inc.'s early leadership contribution in September of $50,000 for Hurricane Maria Relief, Brother's Brother has received almost $1.7 million, of which nearly $1 million was committed to delivery efforts to the island.
﻿