A remarkable expansion of care for cancer patients

One more AHN cancer facility is scheduled to open in the first half of 2020 — the AHN Cancer Institute Academic Center at Allegheny General Hospital, which will serve as the hub of cancer research and clinical innovation for AHN's cancer program.

As AHN builds new clinical facilities, it also continues to enhance existing ones. In 2019, AHN opened three new state-of-the-art cancer care units at West Penn Hospital. These units are part of an $8 million investment that expands space and provides an enhanced and simplified experience for patients with breast, gynecologic, and hematologic cancers.

But the investment in the Cancer Institute is about far more than bricks and mortar — AHN continues to adopt new leading-edge technologies and look for innovative ways to lift the spirits and ease the discomfort of cancer patients and their families throughout their health care journeys.

In 2019, for example, West Penn unveiled its new "Home for Hope," a unique partnership with the local breast cancer advocacy organization Glimmer of Hope, through which breast cancer patients can get complementary therapies such as acupuncture and massage.

AHN also continues to recruit the nation's best and brightest researchers and oncologists, including David Bartlett, MD, an internationally recognized cancer researcher and a pioneer in the use of highly advanced surgical therapies for abdominal cancers. In late 2019, AHN announced that Dr. Bartlett — who is also the president of the international Society of Surgical Oncology — will join the AHN Cancer Institute as its new chair.

"I have been extremely blessed throughout my career to work alongside so many incredibly dedicated and talented health care professionals, all united by a core mission of providing patients facing the most difficult news of their life with compassion and hope," Dr. Bartlett said.

"That same spirit and commitment to excellence in oncology care is what defines the AHN Cancer Institute and its people." 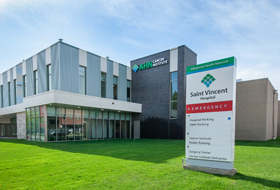 Trainer: Move it in. One one.

Narrator: We help people to be their best by creating remarkable moments.

For the most critical, to help them grow strong.

Helping new moms find their joy. And break the silence.

Chrissy Teigen: Yeah, I just felt like nobody was talking about post-partum depression. It was even hard for me to say the word depression.

Grandmother: Yay, we did it.

Narrator: For every patient. For every moment. Remarkable happens here.

Chris Clark, DO, president, AHN Saint Vincent: I remember the day very well. It was back in 2017 when David Holmberg and Cindy Hundorfean were up in Erie to announce the major investment that Highmark Health was making in northwestern Pennsylvania and Erie. That’s when really everything started to change as a part of Highmark Health's commitment to our community. Our new emergency department is much larger. We’ve increased the points of service. And we can now promote ourselves as having the most advanced services in the region. And we can now have access points so patients don’t have to travel into downtown. And really, Saint Vincent has truly transformed, and we have grown so much as a result of that investment.

Ron Andro, president and CEO, AHN West Penn: The journey at West Penn started in 2013, and it was really the rejuvenation and reincarnation of West Penn Hospital. It started really at all aspects of the hospital, all floors of the hospital, everything from the emergency room to obstetrics, every aspect of care that happens within the hospital. So, great examples for us, we have a brand new neonatal intensive care unit that's very private. Our parents can stay with their children. And then also too the Alexis Joy outpatient program, which is our day hospital for post-partum depression. We continue to push forward, we have a lot of projects that are still on the docket for the coming years as well as all the legacy of what we've been able to achieve most recently.

David Parda, MD, president and CEO, AHN Allegheny General: Highmark has made more than a $400 million investment in the Allegheny Health Network Cancer Institute, and it's had a lot of meaning for cancer patients in the Pittsburgh region as well as caregivers, because all of this investment has taken cancer care in the Pittsburgh region to the highest level. With this type of investment, 13 new cancer centers throughout the region, means that we've got a highly developed and integrated community network, and all of the academic specialty investment at AGH and West Penn makes all the difference in the world, to where we're able to take cancer care in this region to the next level in a much more innovative way that has never occurred in the Pittsburgh region. The fact that we have our communities so well equipped for the most advanced technologies and treatments, and the fact that they're so integrated and connected to the academic specialty programs makes all the difference for the patient treatment, care, outcomes and experience.

Thomas Campbell, MD, chair, AHN Emergency Medicine Institute: Our partnership with Emerus is very special because it's a model that's not in any part of the northeastern United States. All four of the neighborhood hospitals are designed specifically for the needs within the community. Several of our neighborhood hospitals will have additional outpatient services and attached buildings for things such as cancer care, women's health services, primary care, that are needed in that community. So not only does it bring emergency services and the capability of staying in the hospital, it also brings those outpatient services to the community where it’s needed.

Ron Andro, president and CEO, AHN West Penn: Everywhere you look, you see AHN, you see new facilities, you see the presence that we have that we didn’t have before, and then where we were before it's always better.

David Parda, MD, president and CEO, AHN Allegheny General: This investment and further development of Allegheny Health Network Cancer Institute has been an incredible lifeline for all of us cancer caregivers.

Thomas Campbell, MD, chair, AHN Emergency Medicine Institute: I couldn’t be more thrilled to be part of the growth of emergency medicine and on the cutting edge of new models in emergency medicine with Highmark Health and Allegheny Health Network.

Member of the media?

USE DEFAULT THEME USE HIGH-CONTRAST THEME