Purpose:
Committed to fighting the opioid epidemic on all fronts 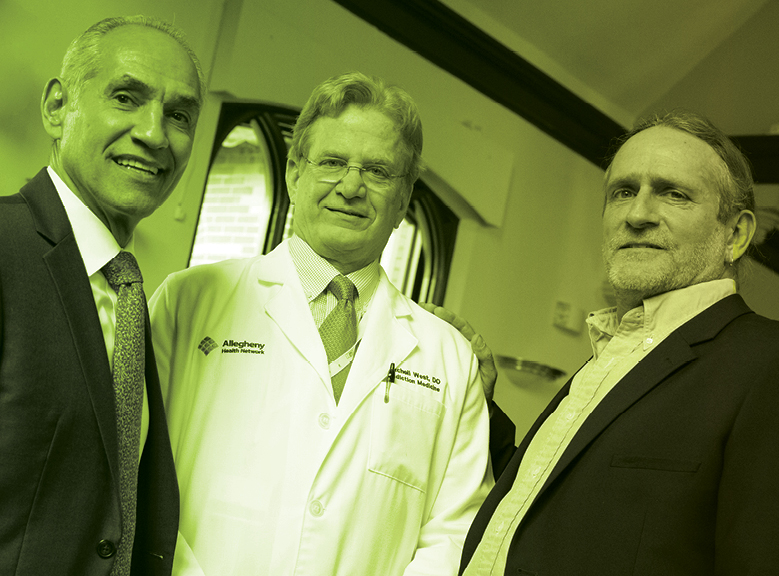 While opioid addiction and related overdose deaths are surging across the nation, the health crisis is particularly acute in western Pennsylvania.

While opioid addiction and related overdose deaths are surging across the nation, the health crisis is particularly acute in western Pennsylvania. In 2016 alone, Allegheny County saw more than 600 overdose deaths and nearly 5,700 hospitalizations due to abuse of prescription painkillers, heroin, fentanyl, and other opioids. And the numbers were expected to grow in 2017.

"This is a true epidemic. And it's not a problem that is going away any time soon, sadly," said Mitchell West, DO, who is the director of Addiction Medicine at Allegheny Health Network. "But AHN is committed to fighting this battle on the front lines — in our hospitals, with partner agencies, and by delivering care in different ways to help patients with opioid-related substance use disorders."

In summer 2017, AHN opened its Center of Excellence for Opioid Use Disorder, a series of interconnected programs and resources designed to help patients who are addicted to opioids receive the health and community-based care and support they need to recover from their illness. With the support of a $1 million state grant that was awarded to only three other medical institutions in Pennsylvania, the program has since expanded to a broader population and includes a new, hub-and-spoke model of care supported by a team of leading experts in addiction medicine.

"Many of the patients we see with addiction to opioids often have underlying issues related to their behavioral or physical health," said William Johnjulio, MD, chair of family medicine at AHN. "The concept behind this center is to wrap our patients with a range of evidence-based therapies and services, which address all of their challenges, to give them the very best chance at overcoming their addiction."

AHN has also spent the last two years redesigning its pain-management processes to ensure that the network's physicians don't overprescribe painkilling narcotics in an effort to tame addiction and reduce the number of opioids that end up being taken home with a patient. Late in 2017, AHN became the first health care provider in the state to equip its clinicians with new software, designed by Appriss Health, which allows caregivers to easily check a patient’s history of prescribed controlled substances.

In its emergency departments, AHN is developing pathways for stabilization of overdose victims, including initiation of effective opioid replacement therapies, followed by more rapid handoffs to treatment. And in the community, AHN was one of the first health networks to partner with local police departments to help administer Narcan, an opioid antidote, to overdose victims.

In 2018, AHN caregivers will continue to work with colleagues at Highmark Health and other entities across the region to combat the proliferation of opioids and treat those who are addicted to them.

"This is a multifaceted epidemic and will require a multipronged solution. But we're making progress," said Jack Kabazie, MD, director of Pain Medicine at AHN. "With the programs and policies we've developed, we're able to provide better care, identify problems much more quickly, and give patients and their families peace of mind when we prescribe controlled substances."