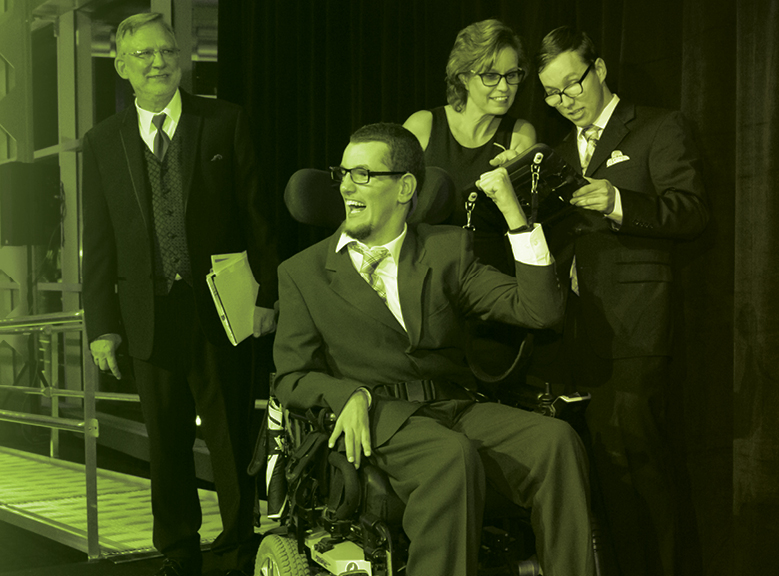 HM Health Solutions (HMHS) gives health plan partners access to talent and technology to run their businesses and communicate with their members. In 2017, HMHS employees chose to support Variety, a Pittsburgh-based charity that helps children with disabilities. By donating their time and technical expertise, the volunteer team gave a voice to children who previously had none.

Children with disorders such as autism, brain damage, and cerebral palsy face more than medical challenges; they also may not be able to speak. For these children and their loved ones, basic communication brings daily frustration. Plus, limited interaction leaves children isolated, lonely, and potentially vulnerable.

That's where innovative solutions like My Voice come in. A modified iPad, My Voice allows users to type in phrases or tap onscreen photos or icons to convey their thoughts, which the device then speaks aloud. During a two-day leadership event in January 2017, HMHS employees raised more than $42,000 — enough to buy 35 devices, giving 35 children a voice anytime, anywhere.

One recipient was Jacob Buchheit, who has cerebral palsy. Jacob demonstrated how he communicates with the device — and seized the opportunity to do stand-up comedy and tell Steelers jokes. His performance revealed a sense of humor that prompted the HMHS team to adopt him as an honorary member. As it did for Jacob, My Voice lets nonverbal children break barriers and reveal their emotions, intellect, and unique personality.

"HMHS' leadership role in supporting the My Voice program has been critical in building a solid foundation to take this hidden issue and make it a visible community issue," said Charlie LaVallee, chief executive officer at Variety.

Beyond fundraising, HMHS supported Variety in 2017 by:

Inspired by the charity, HMHS volunteers have formed a network to continue meeting the needs of disabled children and their families for years to come.