PITTSBURGH (March 26, 2019) — Highmark Health today announced record revenues and continued strong performance during 2018 for the second consecutive year, reporting an excess of revenue over expenses of $570 million and an operating gain of $526 million, driven by continued strong financial performance across all of its companies. 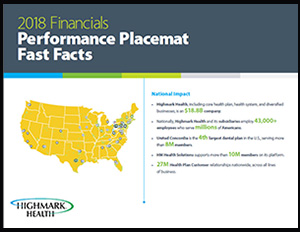 Total revenues improved over prior year by more than $500 million to nearly $18.8 billion, while pre-tax results were $665 million. Highmark Health's balance sheet continued to strengthen, with net assets of $6.7 billion, an increase of $200 million over the prior year driven by earnings, and the organization's cash and investments were approximately $8 billion as of year-end. Highmark Health also reduced the consolidated level of its debt and pension obligations in 2018.

This sustained financial growth has enabled us to provide our patients and members with continued access to high-value, high-quality care closer to home, regardless of where they live, including four new neighborhood hospitals, five community cancer care centers and an Academic Cancer Center at our flagship Allegheny General Hospital, new and renovated emergency departments, and enhanced women’s health services, such as the Alexis Joy D'Achille Center for Perinatal Mental Health at West Penn Hospital and the AHN Women's Institute at Saint Vincent Hospital. These investments have also had a significant economic impact in the core markets where we operate, generating more than 200 active construction projects that we estimate will create approximately 800 new health care jobs, and generate approximately 10,000 construction trade labor jobs.

"We've made much progress in building a strong enterprise since we formed Highmark Health six years ago, as reflected in our strong 2018 financial performance improvements across all of our business units – the second highest results in company history, surpassed only by the record results we reported in 2017," said David Holmberg, president and chief executive officer. "We've delivered on our promise to build a better, integrated health coverage and care system to meet consumer demand. People are staying with us and moving to us and, as a result, we believe we continue to be very well-positioned for the long term, and remain on course to getting health care right for our customers, members and patients."

"Highmark Health's continued financial momentum reinforces the value of our diversified portfolio of businesses and affirms that our transformation strategy is working," commented Karen Hanlon, Chief Operating Officer and Chief Financial Officer of Highmark Health. "In addition to our strong earnings, we continued to make significant investments totaling more than $470 million in our integrated delivery and finance system in order to provide the value, capabilities and services necessary to create a remarkable health experience for the millions of customers we serve across the nation."

Coming off record earnings in 2017, the Health Plan again delivered strong financial performance across all segments in 2018, with operating results of more than $500 million for the year ended December 31, 2018. Commercial business results benefited from a continued focus on cost management to bring value to our customers in all the markets where the Health Plan operates.

Highmark's government business – which includes Medicare Advantage, ACA, Medicaid and small group segments – maintained solid margins as a result of product offerings and continued focus on cost management. We have stabilized the cost of care for our ACA membership by implementing care management programs and designing benefits that encourage the use of lower-cost, higher-quality care options. These efforts have allowed us to pass savings on to our members through smaller premium increases – or even decreases – for our 2019 ACA products. This has led to a more stabilized risk pool and more appropriate pricing in our ACA business.

Health Plan membership is stable with 4.5 million members in our core markets of Pennsylvania, West Virginia and Delaware. We remain the commercial market share leader in western PA with a retention rate of 94 percent and membership of 2.3 million (excluding Blue Card members), as we continue to offer key differentiators with our client services and ancillary product offerings.

Highmark Health's Diversified Businesses — which include our dental, stop loss and vision companies — delivered operating earnings of $159 million. These results improved $56 million over prior year, due to strong performances in our dental and stop loss segments, reinforcing the value of Highmark Health's diversification strategy.

United Concordia, our dental business, delivered operating earnings of nearly $100 million, which is comparable to prior year, and reflects a full year of servicing the TDP contract and continued growth in network leasing partnership revenues. The company's strategic partnerships continue to deliver significant value, driving additional enrollment, operating margin and scale. In 2018, United Concordia implemented three new Blues plan partnerships and expanded existing partnerships to include Medicare Advantage. With more than 127,600 unique dentists in its Network and 8.5 million members, United Concordia is now the 4th largest dental company in the country, approaching nearly $1.5 billion in revenues.

Highmark's stop loss business, HMIG, delivered a significant turnaround from a challenging 2017 performance, with an operating gain of $80 million in 2018, an improvement of nearly $100 million over prior year. These favorable results are due to actions taken in 2017 and throughout 2018 by management to ensure improved operating performance and to restore profitable margin levels. Visionworks, our vision retail and services company, continues to deliver on its turnaround plan under its new leadership team. The company reported an operating loss of $21 million, an improvement of $21 million over prior year, excluding the results of managed vision care.

Allegheny Health Network sustained its positive operating performance trajectory, reporting operating income of $39 million, an improvement of $10 million over prior year. Allegheny Health Network also reported total operating revenues of $3.3 billion, a year over year increase of $213 million, or nearly 7 percent, and a 5 year increase of 50 percent. What makes this significant is that it occurred despite the current industry trends of market contraction and patient transition from inpatient to outpatient facilities.

Allegheny Health Network experienced a 2.4 percent increase in combined total discharges and observations and a nearly 4 percent increase in in physician visits, compared to the previous year. The health system also successfully reduced emergency department visits by 2.6 percent, attributable to the success of its Same Day Appointments program, which increased nearly 34 percent year over year to more than 207,000 appointments in 2018.

Highmark Health also improved results year over year through a nearly $90 million reduction in corporate and other expenses, driven by continued expense control and gains from the first full year of earnings through our investment in Penn State Health.

Highmark Health, a Pittsburgh, PA based enterprise that employs more than 43,000 people who serve millions of Americans across the country, is the second largest integrated health care delivery and financing network in the nation based on revenue. Highmark Health is the parent company of Highmark Inc., Allegheny Health Network, and HM Health Solutions. Highmark Inc. and its subsidiaries and affiliates provide health insurance to 4.5 million members in Pennsylvania, West Virginia and Delaware as well as dental insurance, vision care and related health products through a national network of diversified businesses that include United Concordia Companies, HM Insurance Group, and Visionworks. Allegheny Health Network is the parent company of an integrated delivery network that includes eight hospitals, more than 2,300 affiliated physicians, ambulatory surgery centers, an employed physician organization, home and community-based health services, a research institute, a group purchasing organization, and health and wellness pavilions in western Pennsylvania. HM Health Solutions focuses on meeting the information technology platform and other business needs of the Highmark Health enterprise as well as unaffiliated health insurance plans by providing proven business processes, expert knowledge and integrated cloud-based platforms. To learn more, please visit www.highmarkhealth.org.