Upgrades include enhanced retail, dining experiences for the public

PITTSBURGH (Sept. 4, 2019) — Highmark Health today announced an approximately $20 million capital investment in building upgrades throughout its headquarters at Fifth Avenue Place in Downtown. The building upgrades, which include enhanced retail and dining experiences in the public-facing lobby areas on the first two floors, will take place over the next three years and will support more than 100 construction jobs.

Fifth Avenue Place has served as Highmark's headquarters since the building's completion in 1988. Today, the iconic, 31-floor skyscraper is home to more than 3,000 Highmark Health, Highmark health plan and Allegheny Health Network employees, as well as 16 tenants. The building today has 100 percent office occupancy and a 72 percent retail occupancy.

"Highmark invested in Downtown Pittsburgh at a time when the region was losing companies and jobs," said Karen Hanlon, COO, Highmark Health. "Today, it's a much different story. More than 15,000 people call Downtown Pittsburgh home, and more than 110,000 people work Downtown. It is the heartbeat of our region — and Fifth Avenue place is one of its signature locations. We continue to do our part to make Pittsburgh a top destination to work, live and play."

Highmark's economic impact on the region and the state has grown significantly since the organization established Fifth Avenue Place as its headquarters. In 2018, Highmark generated more than $575 million in tax revenue, including more than $420 million in the Pittsburgh region. Highmark supports more than 83,000 jobs in Pennsylvania, including more than 64,000 in the Pittsburgh region. Those totals include individuals who work directly for Highmark Health, as well as those who work for businesses that supply Highmark Health, employees, patients and vendors with goods and services.

Last year, Highmark Health's economic impact in Pennsylvania exceeded $12 billion, including $9.3 billion in the Pittsburgh region. That includes direct impact (in-area spending related to items such as capital improvements, goods and services as well as operational costs) and indirect impact (all secondary spending, including employee wages). 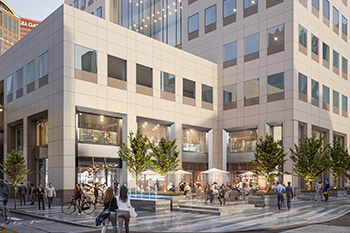 "Highmark Health is committed to leading the transformation of health care, while Pittsburgh is a city transformed," said Dan Onorato, EVP of Corporate Affairs, Highmark Health. "Our headquarters, where many of our employees work to get health care right for our members and patients, should reflect that spirit of transformation. We are also investing in and modernizing a space that has been a community asset for generations, dating back to the days of the Jenkins Arcade. With our new investment, this space will continue to be a community asset in a thriving Downtown region."

Highmark Health, a Pittsburgh, PA-based enterprise that employs more than 43,000 people who serve millions of Americans across the country, is the second largest integrated health care delivery and financing network in the nation based on revenue. Highmark Health is the parent company of Highmark Inc., Allegheny Health Network, and HM Health Solutions. Highmark Inc. and its subsidiaries and affiliates provide health insurance to 4.5 million members in Pennsylvania, West Virginia, and Delaware as well as dental insurance, vision care, and related health products through a national network of diversified businesses that include United Concordia Companies, HM Insurance Group, and Visionworks. Allegheny Health Network is the parent company of an integrated delivery network that includes eight hospitals, more than 2,300 affiliated physicians, ambulatory surgery centers, an employed physician organization, home and community-based health services, a research institute, a group purchasing organization, and health and wellness pavilions in western Pennsylvania. HM Health Solutions focuses on meeting the information technology platform and other business needs of the Highmark Health enterprise as well as unaffiliated health insurance plans by providing proven business processes, expert knowledge, and integrated cloud-based platforms. To learn more, visit www.highmarkhealth.org.